As the Australasian Distributor for Tino Sacchi's Targaline and Evergreen products, Lambretta Concessionaires tries very hard to work with Resellers throughout the region. We want them to succeed so we can bring in more product, and offer better prices to the market so everyone can enjoy quality product.

As such, I'm pleased to say we have the following resellers at the moment:

Hopefully, we'll be adding more in time.
Posted by Siobhán Ellis at 23:07 No comments: 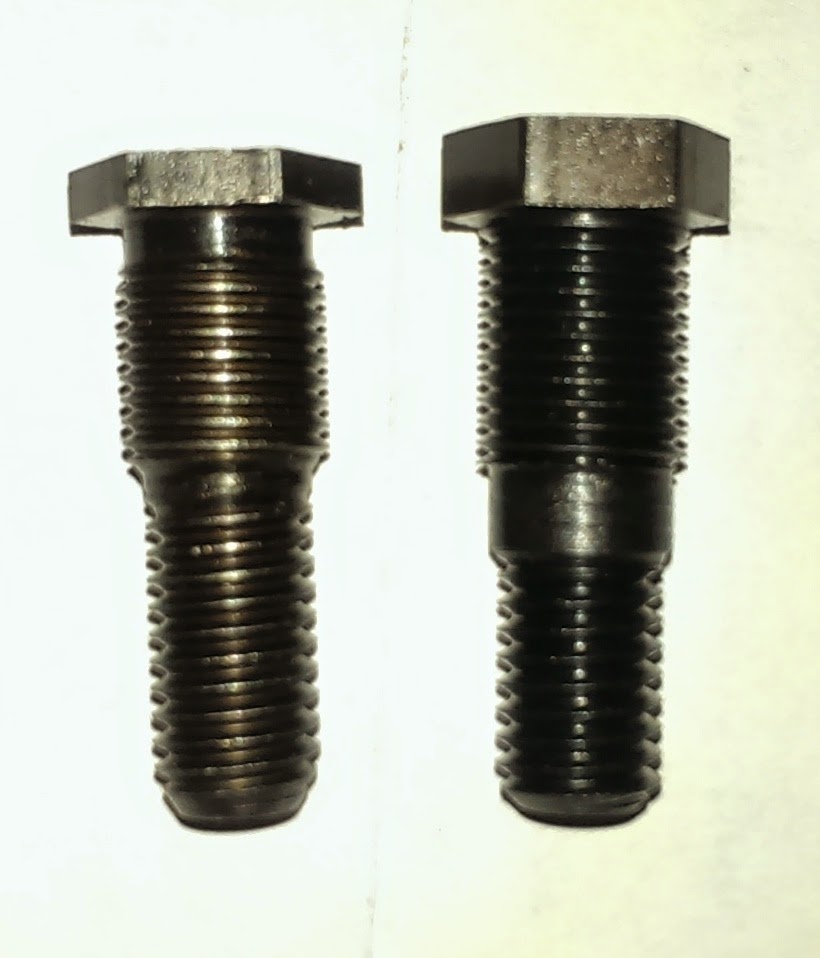 You can see the obvious differences:

You can find them in our shop :

Posted by Siobhán Ellis at 20:39 No comments:

So why the Misano Supercase? 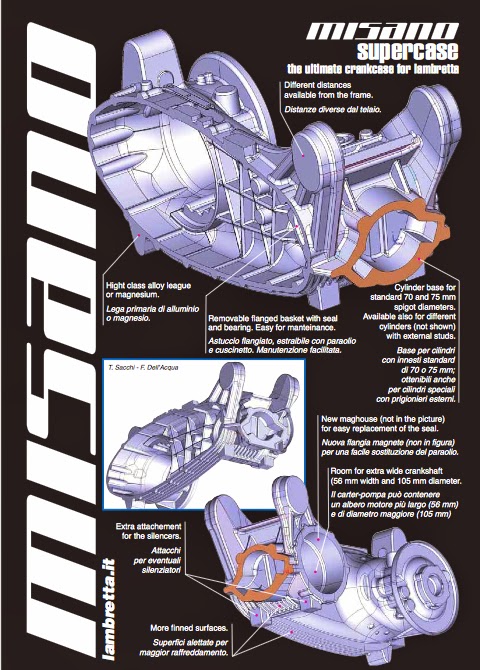 Lambretta Concessionaires, at the moment, is the only place in the world where you can get the new Misano Supercase, designed by Tino Sacchi and F. Dell'Aqua. It is a high spec case, designed with many improvements over a standard Lambretta Case.

So, what do you get in the Misano kit?
The Full PDF, mostly in Italian, is here:

We are trying to get a better translation, but a rough translation is:

Large finned surface cooling: over 50% more than the original
Absolute strength of both torsional and longitudinal ribs and fins.

The crank cheeks are 105mm diameter instead of 94mm diameter, and the width is 56mm instead of 40.5 mm and are thus 33% wider. The connecting rod is 120mm.
The inertial mass moves inside the motor, between the bearings reducing vibration and especially without cantilevered mass, therefore less power consumption.

The increased thickness of the crank webs allow a safer coupling eliminating any form of twisting of the crank, even with very high torque. Needless to say, better to use non-standard cranks with stroke up to 64mm stroke instead of 58. The crank is of high quality and will be provided already mounted in the supercase. The connecting rod is forged and machined for superior quality, as with all the components.

We all know how inconvenient and expensive it is to replace the oil seal or bearing on the chain side.
In fact, for relatively low cost components, it is necessary to anticipate a high cost for the replacement because of high labour charges, as is necessary to remove: power, plug, cylinder, cylinder head, piston and crankshaft; everything for a part that costs a few dollars. Then it has to be reassembled.

With the Misano Supecase any maintenance can be performed quickly.

Simply remove the pinion and extract a basket with the seal and flanged bearing. Replace the seal and / or bearing, the basket can be repositioned and secured with 6 steel screws.
The back of the Supercase has no major differences from the original Innocenti case, except for the larger fins and the ability to use wider 4.00x10 tyres instead of the original 3.50 x 10, not bad!
Nothing has been overlooked, not even the mag flange to hold a power more powerful, programmable Varitronic ignition; In addition you can also replace the oil seal in this case simply by removing a ring from the outside.

Also the distance, from the frame, of the Supercase may be different to the client's request; this to allow mounting of kits with bulky manifolds without resorting to traditional eccentric cones.

What more is there to say?

The user will no longer have to sacrifice more and more expensive and rare original casings with partial results; we have thought of everything!

SUMMARY
TECHNICAL CHARACTERISTICS
The casing comes in Misano:
Anything not on this list may be used interchangeably with original or latter market as per the original.

Posted by Siobhán Ellis at 00:24 No comments:

Australia started receiving Model B Lambrettas in 1949. A great deal of research has been done by members of the Lambretta Club of Australia, and fellow enthusiasts, and have even traced down the ship that the first ones came in on. 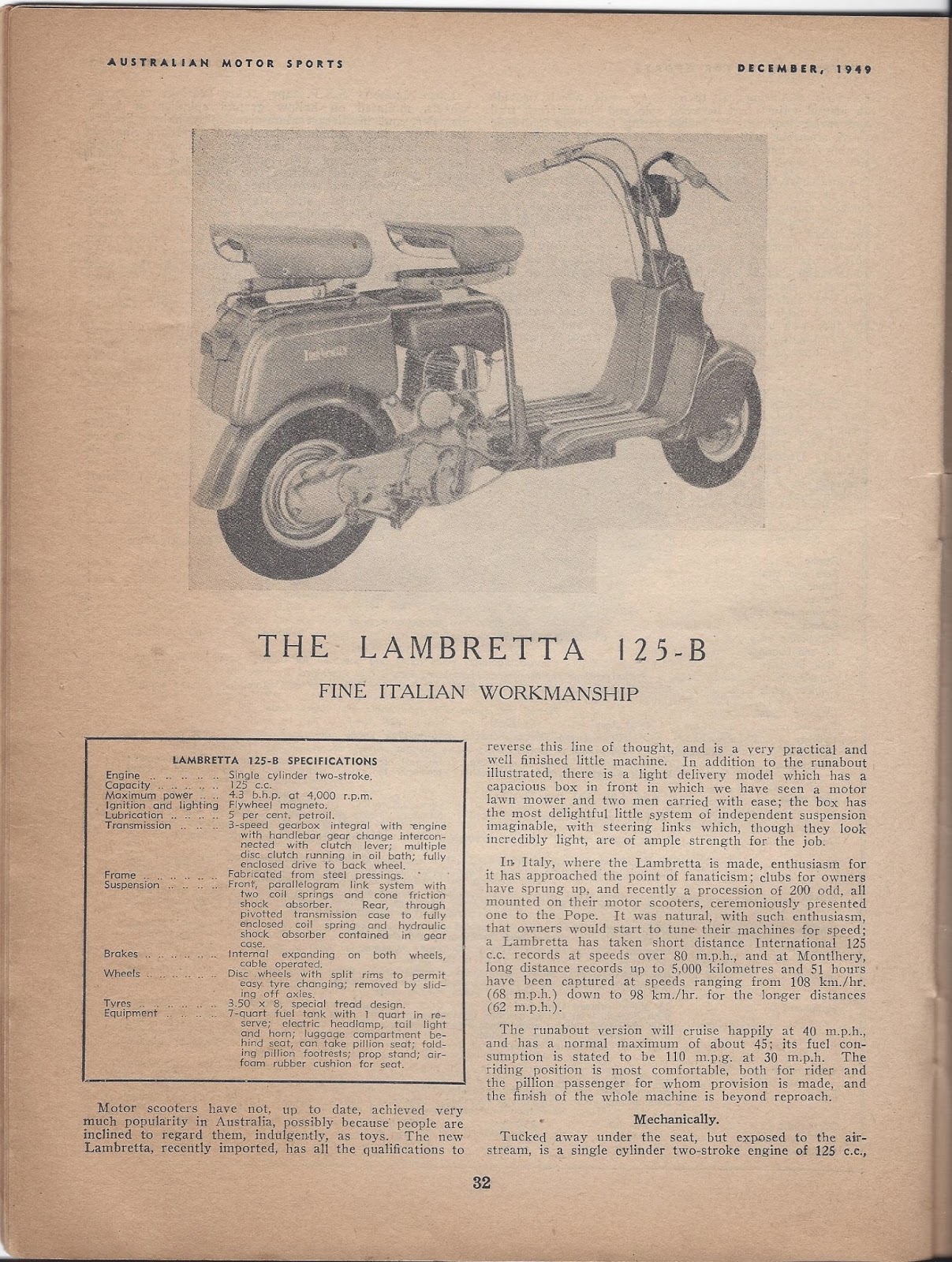 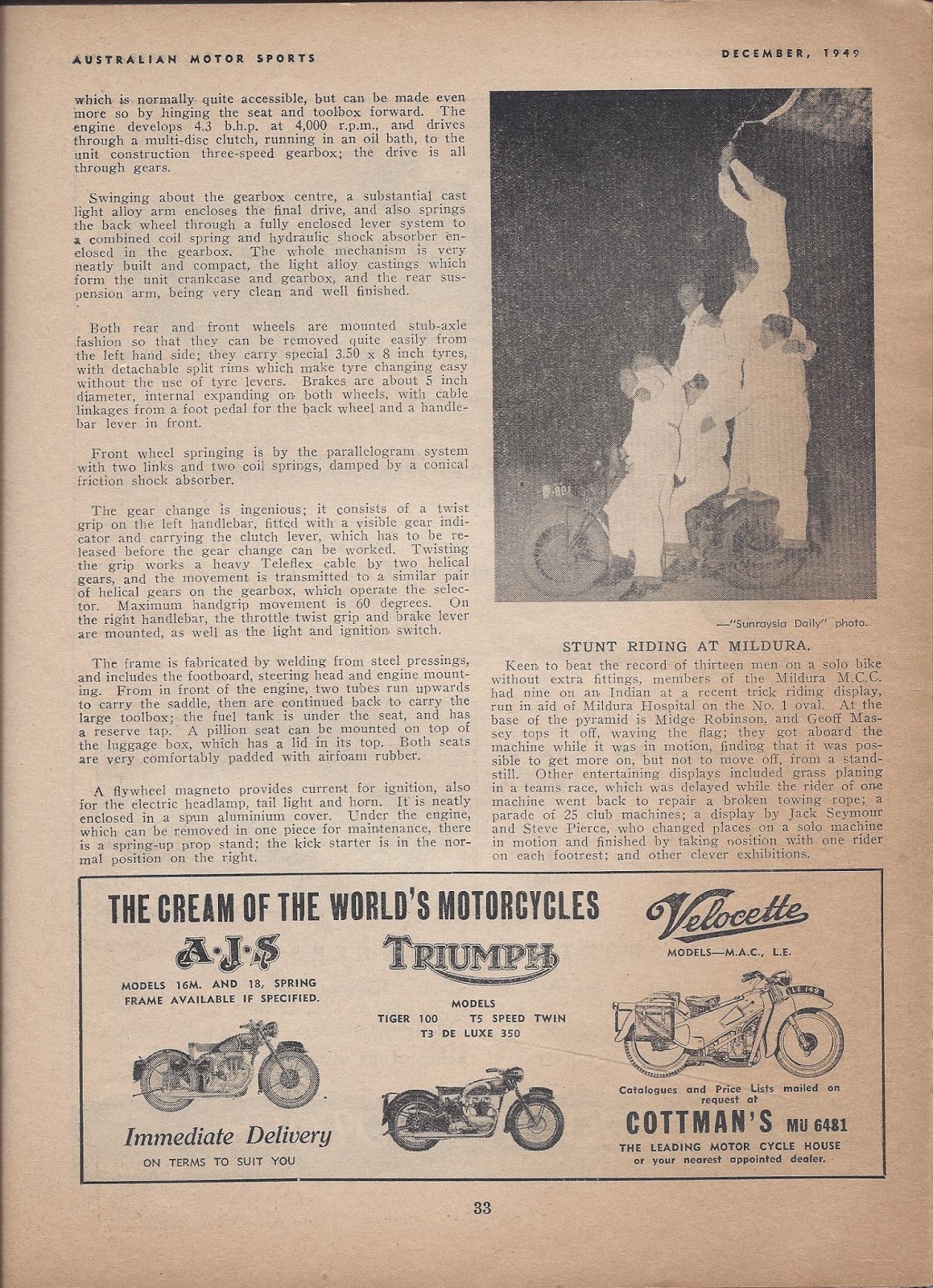 Posted by Siobhán Ellis at 23:55 No comments:

Over the years, we've accumulated a few original newsletters.

I thought this original Service and Technical Newsletter would be quite handy, as a number of people find it quite frustrating to service the inboard disc brake. 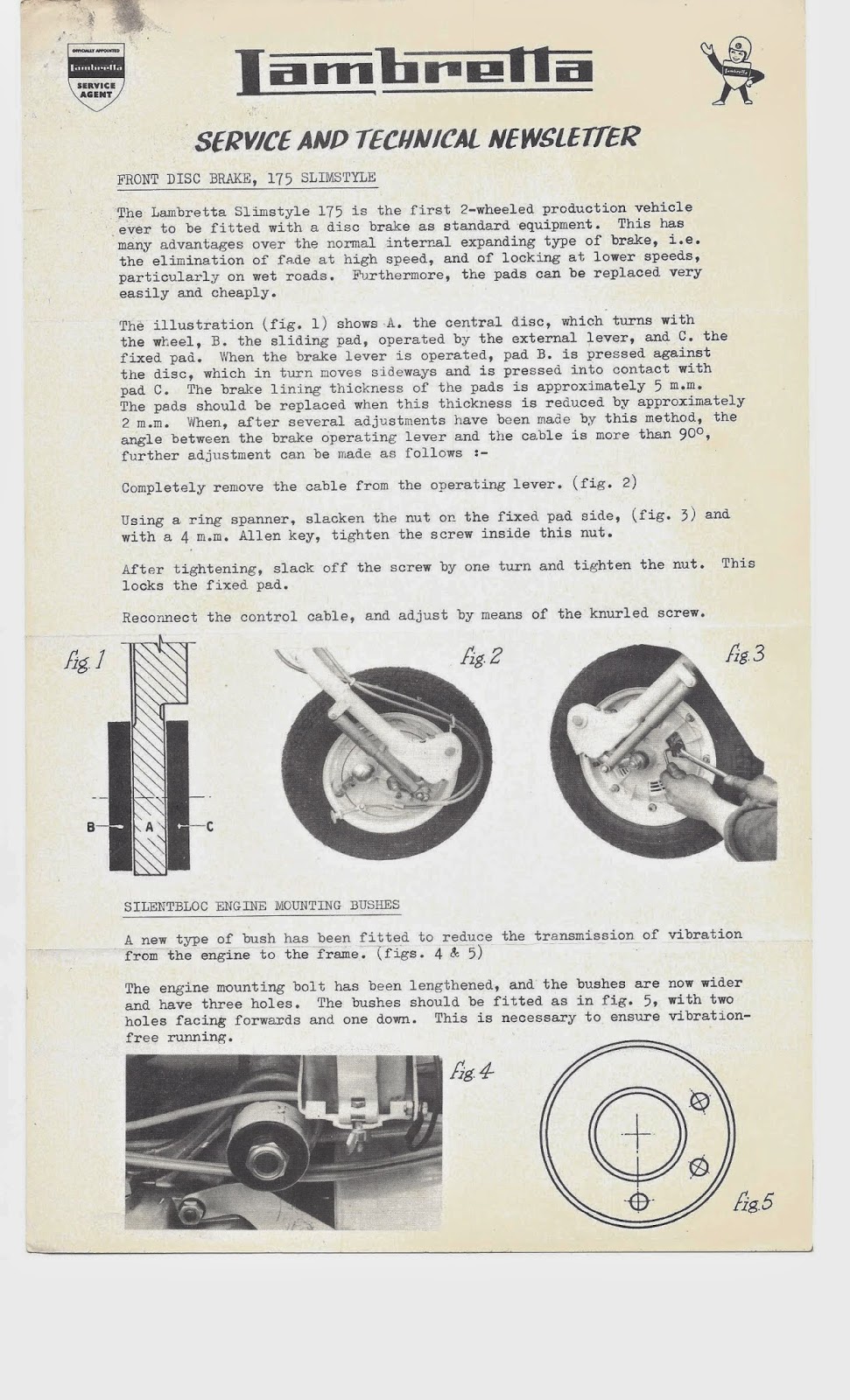 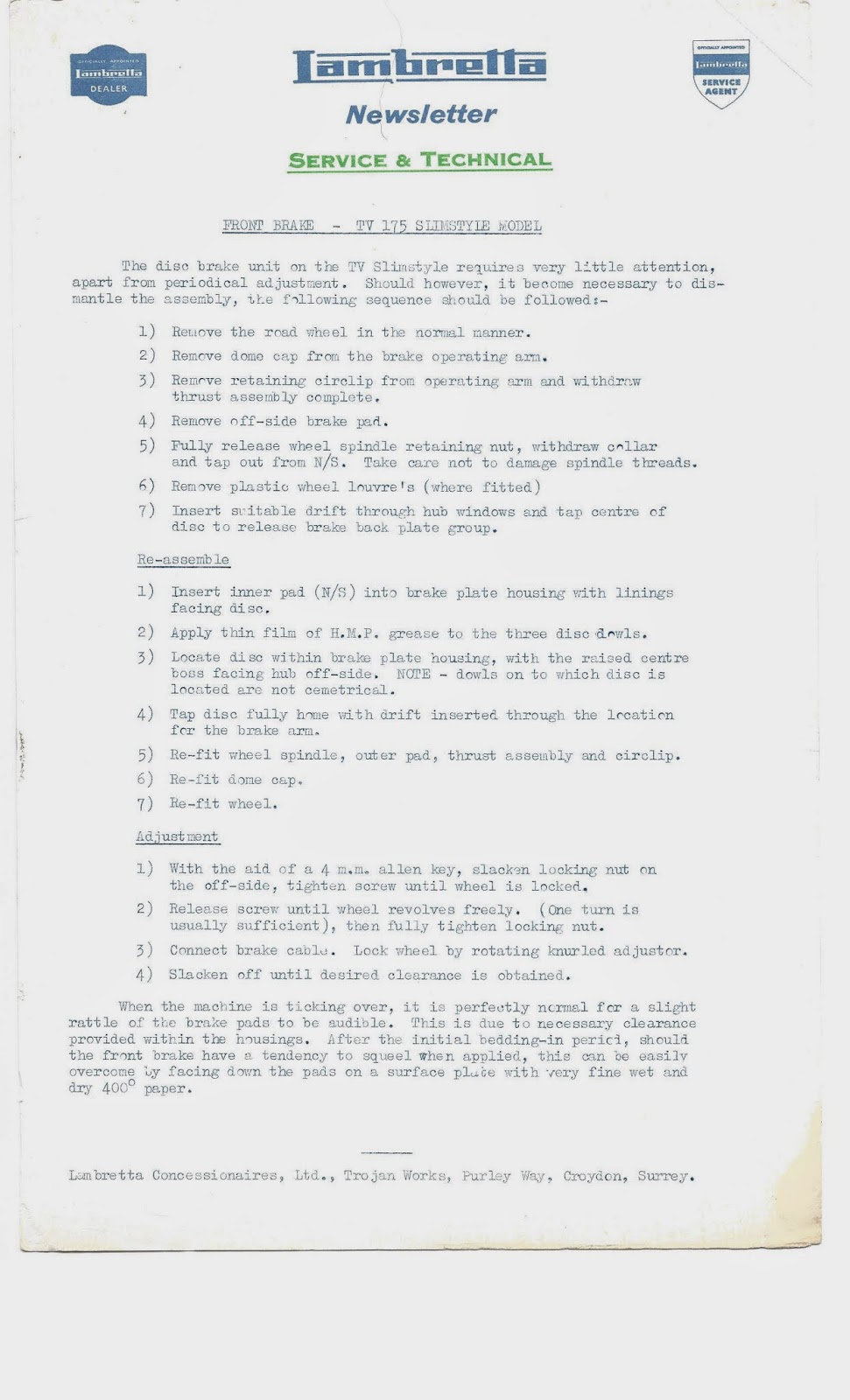 Posted by Siobhán Ellis at 22:13 No comments:

This Blog will be about anything Lambretta that Steve and Siobhan find interesting, or to announce news about Lambretta Concessionaires, such as new parts we are bringing to the Australian market.

It is a blatant attempt to try and get you to come back and visit us on a  regular basis.

Follow this blog
Posted by Siobhán Ellis at 21:16 No comments: